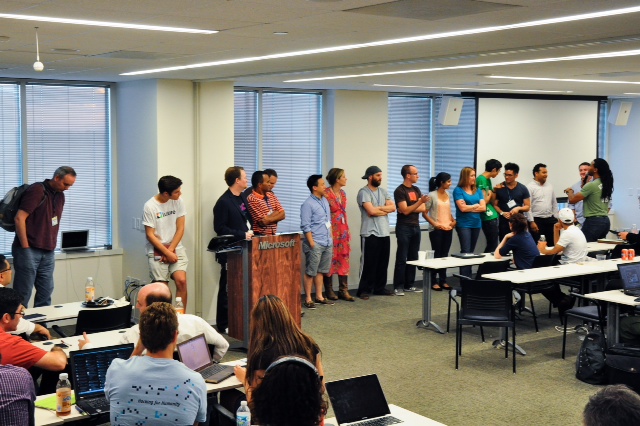 PeerPower got started at the NOVA EDU Startup Weekend - June 2012.

We are the exclusive providers of these percentile rankings. You can trust our results because we have the most up-to-date (anonymous) data provided directly from the Virginia, Maryland, and Massachusetts Departments of Education. We also participated in the in the Virginia Longitudinal Data System (VLDS) Apps4VA competition, a program sponsored by the Virginia Department of Education and the Center for Innovation and Technology (CIT) where we received feedback from many different audiences, including DOE administrators, advisors, students, educators, and parents.

PeerPower presented at the VLDS Insights Conference - you can see our powerpoint in this document on the CIT website:

Michael Nolan (LinkedIn) is the founder of PeerPower. He lives in Fairfax County, Virginia. He and his wife are the very fortunate parents of two amazing sons - one at Arizona State University and one at the University of Virginia.

We would be happy to answer any questions you have about the PeerPower reports and website and welcome your feedback. Please email us at support@PeerPowerInc.com or use the contact us page.

Questions & Answers - click on the question to see the answer

Q: Does my state already release this information?

Q: I put in all the right information for my / my student's test but there were no results, how come?

A: The most common reason this happens is you have requested a test that was not given at the school you selected. Make sure you entered a valid test/school combination. For example, Algebra I is not usually given in elementary schools, but some customers get PeerPower Percentile Reports for an elementary school student first and then go on to select a test for an older High School student without updating the school. We are working on making this easier for our customers. If you still think you entered a valid request and got no results, please contact us with the State/School Year/School District/School/Test information for the test your student took, and we will get back to you.

Q: You don't have Percentile Reports for [your state / your school district ], how come?

Q: How do I find my / my student's PeerPower Percentile Report if I don't know what score they received?

Q: If States provide the data, is that a violation of my student's privacy?

A: States that provide data to PeerPower strip any identifying information from the data - so the data states provide us do not have gender or race information, and this allows states to comply with the Family Education Rights and Privacy Act (FERPA). PeerPower doesn't know what score your student received - that is why you need to know what score your student received in order to get their Percentile Report.

A: Yes. States provide PeerPower with the anonymous data we use to compute the Percentile Reports soon after they have finished processing the scores. This is usually right after they send scores to parents. When you order from PeerPower we email you whenever the data has been updated (different states update at different times during the year). But this is also the good thing about having annual access. When the data is updated you can come back and check your student's percentiles. Typically, though, the State and District percentiles don't change much from year to year. The School percentiles can be more volatile because they are based on a smaller set of students - just the students who took that test at your student's school, as opposed to the entire school district or state.

Q: Where does PeerPower get the data to compute the Percentile Reports?

A: States provide PeerPower with the anonymous data we use to compute the Percentile Reports.

A: At some point many families have conversations with their students about how the world works - and part of that means that your student will be compared to their peers. Does that mean when that comparison happens your student always has to win? Of course not. However, it's safe to say at some point your student will be compared to peers in a situation that matters to them and they will want to stand out compared to those peers. Whether it's when they apply for an internship / magnet school / college / graduate school / job / loan, start a business, or even when appealing to a potential significant other! Does this mean they should live their life constantly comparing themselves to their peers? Again, of course not. Every family will decide on an individual basis in what parts of their life a student will want to stand out compared to their peers. School and standardized tests are a way to introduce this concept to our students and to give them an opportunity to practice at it. But it's up to you to decide whether and when that conversation happens.

Q: Should I share the PeerPower percentile report(s) with my student?

A: You know your child best. Some kids will be motivated to continue to work hard (or harder) at school when they know where they stand compared to their peers.

Q: How can I use PeerPower Percentile Reports?

A: PeerPower customers (typically parents) use the percentile scores in different ways. Some customers simply feel better having a more complete picture of where a student ranks compared to his or her peers. There are many other scenarios where percentile scores are valuable, here are the most common examples:

A: Michael Nolan (LinkedIn) is the founder of PeerPower. He lives in Fairfax County, Virginia. He and his wife are the very fortunate parents of two amazing sons - one graduated from Thomas Jefferson High School for Science & Technology as a National Merit Scholar and currently is studying Astrophysics at Arizona State University and one graduated George C. Marshall High School with an International Baccalaureate (IB) degree and currently attends the University of Virginia.

A: States don't supply percentile scores (see "Why doesn't my student get percentile scores..."). Our students are growing up in a world where they are competing not just with other Americans but job seekers from all over the world. Families know that a good education is more important than ever, and want to know if their students are on track, but they are either confused about test scores or don't believe they are valuable.   While almost all researchers acknowledge that standardized tests don't measure everything important, there's a good deal of research showing that these tests do predict important long-term outcomes. PeerPower saw a need to provide percentiles to parents, students, teachers, and administrators and our company was born.

Q: Why doesn't my student get percentile scores when they get their test scores?

A: Most states created / use these standardized tests to comply with the No Child Left Behind Act and/or Every Student Succeeds Act, and those laws do not require that states calculate and provide percentile scores. Furthermore, and this gets a little technical/statistical, most state standardized tests are criterion-referenced tests, as compared to norm-referenced tests. Generally, states offer criterion-referenced tests because the state's goal is to see how many takers of the test simply pass - kind of like a driver's license exam. But at PeerPower we learned that percentile scores are good predictors of life outcomes, so we started PeerPower.

Q: What are PeerPower Percentile Reports?

Q: How do I get my free reports?

Q: Do you offer discounts for students who qualify for Free or Reduced Price Lunch?

A: Yes. Families that qualify for Free or Reduced Price Lunch can use coupon code ICANSOAR during checkout to get 80% off.

Have another question not listed here? Please Contact us with your question(s).